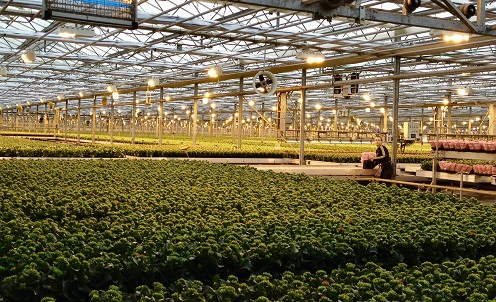 There's a good chance that you've got one on your windowsill - one of the most widely available houseplants in Denmark.

But the production of ornamental Kalanchoes is affected by some of the same challenges that affect food production: pests and fungal pathogens threaten growth. The means to combat these diseases, often through the use of chemical pesticides, are themselves harmful to both the environment and human health.

Consequently, a research group from the University of Copenhagen is working to find solutions that help this houseplant protect itself from disease while protecting the environment. Together with Knud Jepsen a/s, a Danish horticulture company that grows roughly 20 million houseplants plants annually, the researchers developed an alternative to chemical pesticides.

"We have been successful in using living microorganisms to protect Kalanchoe plants, so that instead of applying pesticides, plants can be dipped into natural bacteria. We are now working to concoct the perfect cocktail of microorganisms for Kalanchoe production," says Hans Jørgensen, the researcher behind the project.

He explains that the research team has tested a few special types of bacteria that repel root attacking fungi, while simultaneously allowing the plant to grow more aggressively and serving to activate the plant's own "immune defense system".

To produce the large amount of bacteria required for large scale Kalanchoe production, researchers must cultivate them in a tank, a process that takes a couple of days. The plant cuttings are then treated with the bacteria.

Planting soil is also treated with the bacteria, so that both plants and soil are exposed to the right combination and amounts of bacteria to combat fungal pathogens.

Knud Jepsen a/s R&D Manager Kai Lønne Nielsen explains that the pilot experiments have been promising and that the company will now work to implement microbiological controls in its production process.

"This research allows us to implement all aspects of our strategy to be pesticide free. We are experiencing great demand for pesticide-free plants, and we would like to accommodate it,” says Kai Lønne Nielsen.

According to researchers, the bacterial cocktail can be used for other types of houseplants and food crops, although further research will be needed to transfer the newly acquired knowledge to other plants.

The project has received DKK 4 million from the Green Development and Demonstration Programme (GUDP) (J.nr 34009-16-1068) and focuses on how bacterial flora can prevent the occurrence of plant diseases.

The researchers will work towards making a compound of useful bacteria that can create ideal soil conditions and thereby improve plant defenses.

Project results have been published in the journal of the American Phytoplathological Society, Plant Disease: (LINK) Prevalence of soil-borne diseases in Kalanchoe blossfeldiana reveals a complex of pathogenic and opportunistic fungi.